It's finally finished and the official release date is this Thursday 26th October 2017! Mr Panda will be jetting his way onto the Google Play and the App Store for his mobile debut. For more information or for a review copy please get in contact with us at: This email address is being protected from spambots. You need JavaScript enabled to view it.

Want to know what we do to make testing our games as quick and efficient as possible? Then read on...

We are now in the final stages of testing our new game - Lunar Panda Deluxe. We have release builds for various mobile platforms, and (along with some help from other Gimpy Software friends) are testing the product as much as we can. Just because we’re a small Indie Dev company, it doesn’t mean we should skimp on testing...

So as you can imagine we have played our own game A LOT. Each and every level (We have many!) requires playing several times with various tactics - The combinations all add up! This means that, where we can, we have to make testing as fast and targeted. Here’s some pointers on how we do it.

2) Add a mechanism for jumping straight to any level.
It sounds obvious with hindsight, but implementing this feature early on can save hours of time. If your game is for mobile devices only then you have the option to use keyboard shortcuts to skip levels (when testing on a desktop machine, anyway). If you’re serious you could also add an in-game command-line console (RememberQuake?) or debug screen. Note: Be careful about adding ‘debug build’-only changes to your code. Giving yourself infinite lives in debug builds can be handy, but the more ‘conditional’behaviour you introduce the more likely it is you’ll miss in a bug in the release build.

3) Restarting levels, Instance health, and Invincibility.
...plus anything else you can think of! One of the most useful in-game shortcuts we added to Lunar Panda Deluxe is the ability to kill your velocity. In the game your character, Mr Panda, needs to land gently on a landing zone without running out of fuel. Being able to kill your velocity means we can thrust at break-neck speed to the landing zone, halt at the last-minute, and then test the landing code. A great shortcut, and looks cool too!

4) Slow Mo
This one is tricky to add, and may be especially difficult if added too late in your development cycle. It can be a real bonus when it comes to looking at animation and collision detection, but it is easy to get wrong. Unless your engine has good support for variable time between game events (E.g. ‘ticks’, game steps, etc), changing the speed can change runtime behaviour. Think of a game like Pac-Man. If your character is moving one pixel per frame then collision detection is relatively straight forward. If he moves three pixels per frame then you could get stuck in a wall.

I hope that gives you some ideas, and helps in some way to make your development and testing process a bit smoother!

In all its iterations Lunar Panda seems to have suffered one particular problem in that if you've never played that other game that's a bit like Lunar Panda (you know the one) then chances are you won't know what you're doing straight away. I saw this quite a bit at various expos. Players of Lunar Panda were often divided into two camps, people that knew how to play it straight away or spent a bit of time working it out and those that had no idea about Mr Panda's objectives. I saw plenty of people picking up a controller, blast him into space, look confused and walk off. Occasionally I'd intervene and explain how the game's played at which point a new player would quite happily spend some time working there way through a few levels.

So! What's to be done? The answer 'hopefully' is four things.

Firstly. we've now added a tutorial to the menu, for those diligent enough to peruse that option. This is a still scene with just enough information to explain the aim of the game but not so much that we bore the player.

Secondly. Upon starting a level for the first time, the view scrolls from Mr Panda to the landing pads and back to Mr Panda again. Some players didn't realised that there were landing pads below some level starting positions. It's also a great way of giving the player a quick overview of the level and a chance to devise a potential strategy.

Thirdly. An overlay is displayed briefly the first time you play one of the levels on the first planet, with some animated fingers showing you how to rotate and thrust.

And last but not least. The first time you ever play one of the levels on the first planet you'll see some animated text telling you to "Land here...but gently" linked to a landing pad. 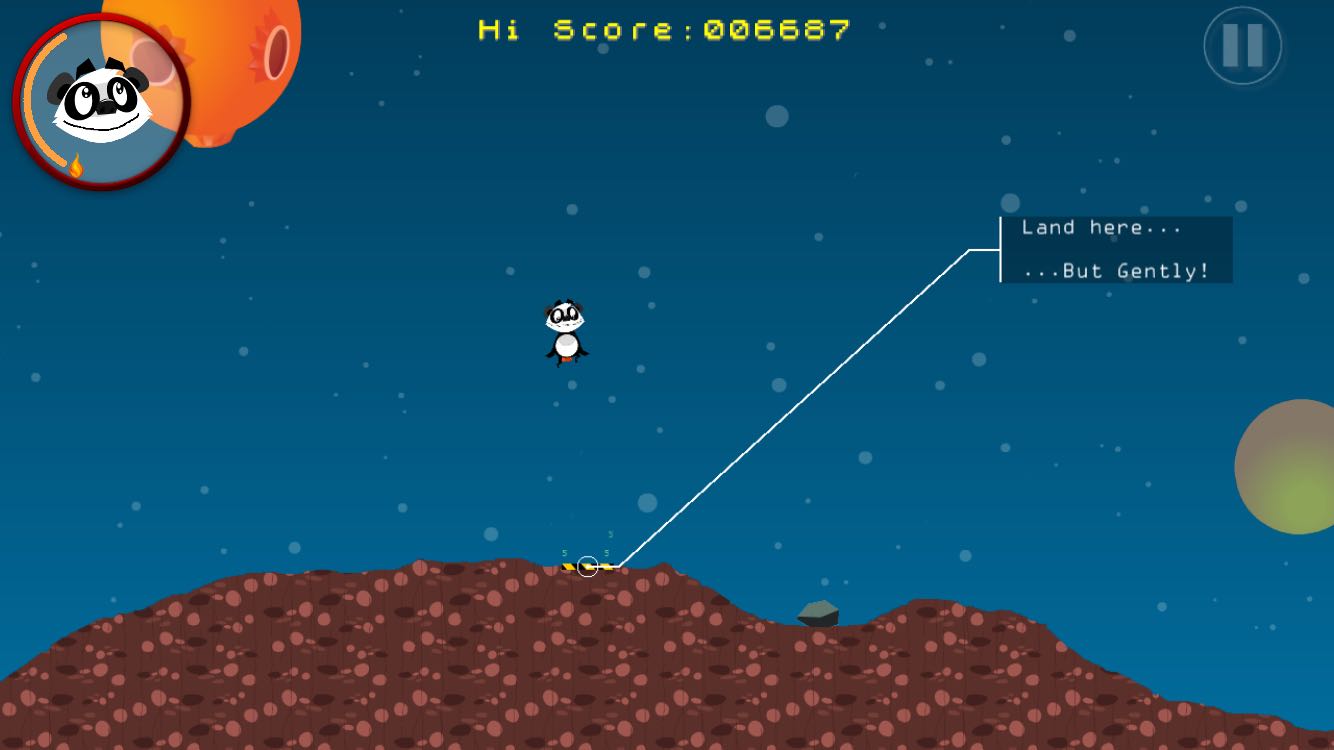 It sounds like a lot but their all quite minimal changes that are displayed to the user just enough to get the information across without being patronising or taking focus away from the game. Next step will be to put this new and hopefully more intuitive version into test with some people that have never played the game before to see how they do. Fingers crossed.

The level progression of our previous incarnation of Lunar Panda played like an old school video game where you worked your way through the various acts and planets sequentially. This time around we thought it'd be better to add some menu screens a bit like the ones you get in most popular mobile games like Angry Birds etc. So with that revolutionary idea in mind we set to work designing our very own level menu.

We divided the menu into the various planets that make up Lunar Panda and as you complete all the acts that make up each planet then the next planet unlocks. The acts that make up each planet can be completed in any order and the player is free to go back and play levels from previously unlocked planets. To give it a bit more sheen we've also added a little Polaroid graphic for each act along with that levels current high score. The player's progress is stored locally on the device but can be cleared at any point via another menu option if required.

Check out the results here: